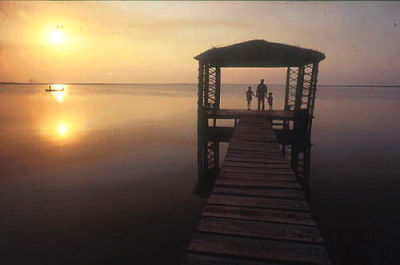 On the south shore of Río Pilcomayo, in the northeast corner of Formosa Province is Parque Nacional Río Pilcomayo, one of the great pearls of Argentina’s national park system. This reserve protecting a 52,800-hectare (130,472-acre) swatch of Wet Chaco ecosystem has been a Ramsar site since 1992.

Its Q’om name is Satalik-Lateday, Mirror of Clear Waters. Three estuaries, or esteros, lace its interior: Zanjita, which drains into the Rio Pilcomayo, and Poí and Von Sastrow, which flow into Laguna Blanca. These waterways are carpetted with camalotales (waterlily fields) and giant bullrush sedge (totora). The land is also marked with glens, savannahs mottled with carnauba wax palm (caranday), and hardwood forests.

Parque Nacional Rio Pilcomayo’s flora and fauna are adapted to this environment of flooding and prolonged dry spells. Some adaptions are bahavioral, such as bird migrations, whereas others are physical, such as the South American lungfish (pez pulmonada) which can breathe air.


In the forests reside black howler (carayá) and southern owl (mirikiná) monkeys. Five types of big cats call the reserve home, including the jaguarundi (gato moro), jaguar (yaguareté) and puma. Other mammals present include tapir (anta), grey brocket deer (guazuncho), giant anteater (oso hormiguero), and maned wolf (agaurá guazú). Serpents include the yellow anaconda (curiyú) and the false water cobra (ñacaniná).
Near estuaries and lagoons are found capybara (carpincho), long-tailed otter (lobito del río), crab-eating fox (zorro de monte) and crab-eating raccoon (aguará popé), as well as many native fishes, including palometas, kin to the piranha. (The park has instituted a don’t-feed-the-fish policy, which has ended incidences of swimmers getting unwanted nibbles.) Both species of caiman, the southern spectacled (yacaré negro) and the short-snouted caiman (yacaré ñato or overo) hang out at Laguna Blanca and other bodies of water.

The avifauna is equally impressive, with almost 300 species recorded in the park. Among them are Slaty-breasted Woodrail (Saracura), Monk Parakeet (Cotorra), South American Stilt (Tero real), and Great Egret (Garza Blanca). A trio of storks may be spotted and three types of Argentina’s resident kingfishes are present. Cormorants, toucans, woodpeckers, blackbirds, spinetails and other species are also represented.

The best time for viewing wildlife is before 9 a.m. and after 6 p.m., when temperatures are more moderate. The best sector for land beasts is Estero Poí.

Parque Nacional Río Pilcomayo has two main ranger stations. The most popular sector is Laguna Blanca, named after the 700-hectare (1,730-acre) lagoon that is favorite swimming hole on blistering days. This lake, only three meters (10 ft) deep, is fed purely by the rain-fed Poí and Van Sastrow estuaries. The Sendero a Laguna Blanca is a boardwalk cutting across marshlands to a series of docks and lookout towers (Distance: 400 m / 1,312 ft, Difficulty: easy, Duration: 15 min). Sailboats and row boats are allowed on the lagoon. The reserve’s human neighbors rent canoes. This sector has an information center with a small display of skins and skulls of various animals found in the park, and jars of pickled snakes. Near the guardaparque is a camping area. Here starts the Sendero Carayá Caaguy, a self-guided trail through a forest inhabited by black howler monkeys (Distance: 200 m / 656 ft, Difficulty: easy, Duration: 20 min). Ask the rangers for the pamphlet (Spanish only). 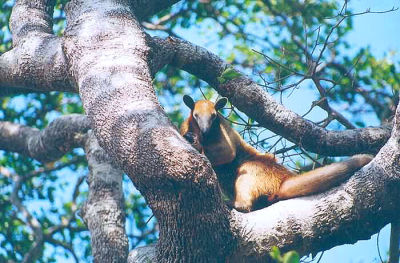 Sector Estero Poí is closer to Laguna Blanca village. The road from Ruta Nacional 86 goes to the ranger station and continues to the banks of the Río Pilcomayo. At the guardaparque is a campground. This part of the park has two interpretive loop trails. Sendero Secretos del Monte is near the station (Distance: 600 m / 1,969 ft, Difficulty: easy, Duration: 45 min). Three kilometers (1.8 mi) north of the ranger station, down the road to the river, is Sendero de Caraguatá Caaguy, also called Karaguatá Guatahá. This trail traverses areas of the vase plant (caraguatá), a wild cousin of the pineapple, and palm groves (Distance: 900 m / 0.5 mi, Difficulty: easy, Duration: 45 min). Six kilometers (3.6 mi) past this sendero is a bird observation post. Five kilometers (3 mi) further on is the Río Pilcomayo. To transit the river road, you need to report in to the rangers, to check on road conditions. (Recent rains may make stretches impassable.)

Camping is free in the park. Facilities include bathhouses, tables, grills and electricity. At the Laguna Blanca site, keep your items well protected from the monkeys’ reach. None of the sectors have provision shops or food services, so bring all supplies. Water is potable, though some people may have problems drinking it. At Laguna Blanca, entry is charged on Sundays only (Argentines $1.15, foreigners $7; people under 16 or over 60 years old free). No fee is charged at Sector Estero Poí. The administrative office, Informes Administración de Parque Nacional Río Pilcomayo, is in Laguna Blanca village (Monday-Friday 7 a.m.-2 p.m. Pueyrredón s/n and Ruta Nacional 86, Laguna Blanca, Tel: 47-0045, E-mail: riopilcomayo@apn.gov.ar). The center also has an excellent, bilingual research library.
The best time to visit Parque Nacional Río Pilcomayo is during the winter months (June-September) when it is fresher, dryer and there are fewer insects. Rains begin in September. The rainy season runs from December through March. Temperatures during these months reach 47ºC (117ºF). 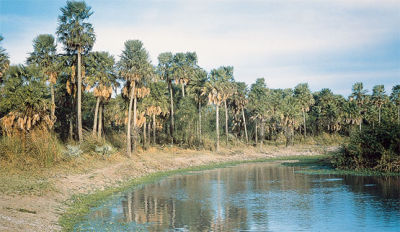 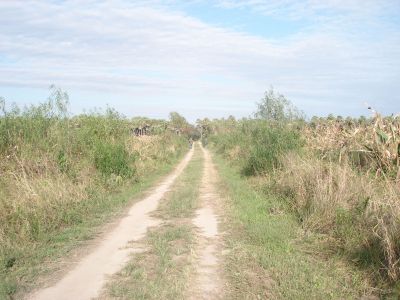 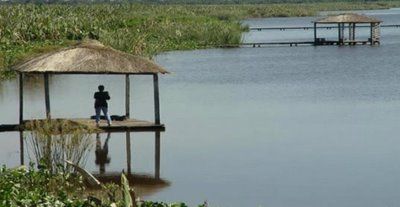 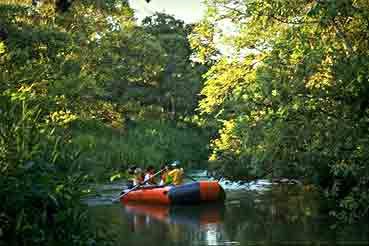 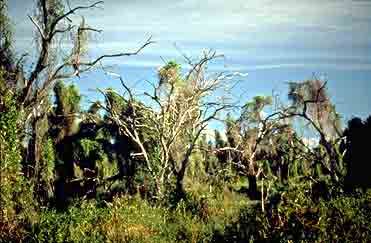 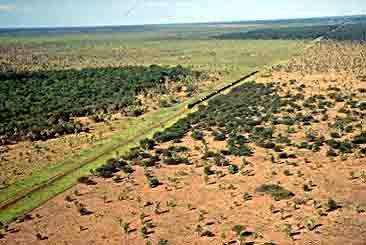 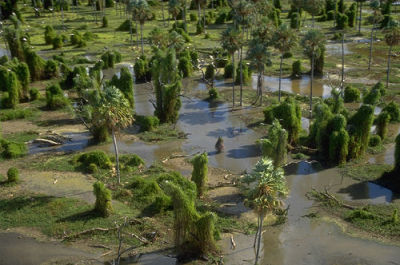