Iguazu Falls, no maps, satellite or virtual reality can never replace the physicality of such a place.

The Iguazu Falls are waterfalls generated by the Iguazu River located on the border of the Brazilian state of Paraná and the Argentine province of Misiones.

The system consists of cascades of 300 waterfalls, with heights up to 70 meters, along 2.7 miles of the Iguazu River. La Garganta del Diablo ("Devil's Throat"), a U-shaped gorge 150 meters deep and 700 meters long, is the most impressive, and marks the border between Argentina and Brazil. 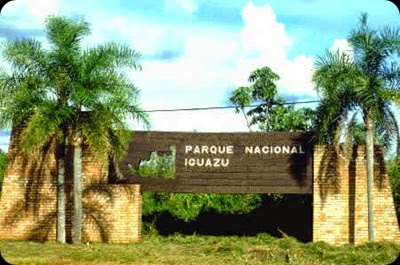 The majority of the waterfalls are in Argentine territory, but from the Brazilian side (600 meters), you get a more panoramic view of the Garganta del Diablo.

These parks have been designated UNESCO World Heritage Site in 1984 and 1986 respectively.

The waterfalls of the Iguazu River are perhaps the most popular and well-known in South America.

The giant river, which in this section forms the border between Brazil and Argentina, suddenly collapses vertically to eighty meters into a narrow gorge, called the Devil, forming a spectacular waterfall wide arc of a mile and a half.

No maps, satellite or virtual reality can never replace the physicality of such a place, but it is interesting to find out how many geographic information you can get by simply exploring it through virtual globes like Google Earth or NASA World Wind.

The information available on the Net waterfalls are predictably very numerous. Just a quick search on Google to find out that the place is counted, since 1984, including World Heritage Sites by UNESCO, the particular ecosystem environmental sub-tropical surrounding the falls is further protected by two national parks, one Argentine, the other Brazilian, and that there are numerous tourist accommodation infrastructure to easily visit this wonder of the world; photos supplied are of course spectacular, wonderful and just as many.

However, this wealth of information, something (very) inevitably escapes: the waterfalls seem suspended above a place without time and space. A place of paradise made of sub-tropical forest, endemic species unique in the world and an ocean-waterfall that plunges into the void.

To contextualize this wonder, by inserting it in the contemporary world in which we live, there is nothing easier today than to open Google Earth or NASA World Wind and type in their search engines: Iguazu Falls.

Google could not provide, for a place so popular, high-resolution satellite image. Hence materialize from the great and much acclaimed infrastructure tourist accommodation (photo 2): luxury hotels, complete with a swimming pool, walkways that run along the river to look out over the abyss. It is one of the many forms of the new global world (the rich), where every place is near and approved, so that you lack nothing of what is left to visit. The hotels along the waterfall is insufficient to contextualize the place: you have to see it from far away and from different points of view: for this, NASA World Wind, with its Landsat satellite imagery and its accurate DTM, is unrivaled. Observe the waterfall in 3D World Wind (picture 3) does in fact understand the superiority of this tool, the 3D graphics rendering and in return, compared to what is commonly obtained from Google Earth.

It turns out, inevitably how little surprisingly, that the protected area around the falls is but a small green spot in a vast hilly profoundly transformed by human activity and dotted with smaller and larger urban centers.

In Argentine territory, check curious, from the forest, even a giant airport, that before reaching to the north, the city, along the waterfall and its tourist centers. This is also a sign of the new global world, where everything is close to pact to be able to reach in a few hours by plane.
The boundaries of the park: in Brazilian territory (foto4) are very evident, as evident is the different level of deforestation in the south-east along the border with Argentina.

Still, you can see the many dams. Curious here, watching the coverage Landsat 1990 and put it in comparison with that of 2000 (photo 5): south of the falls, in Argentine territory, there appears a new large dam.

These above are just some of the interesting information on the geography of a place that you can get on the Internet, through the use of 3D Globes. To avoid the risk of a place to visit or study without first watching him (and imagined) in a wider geographical area. 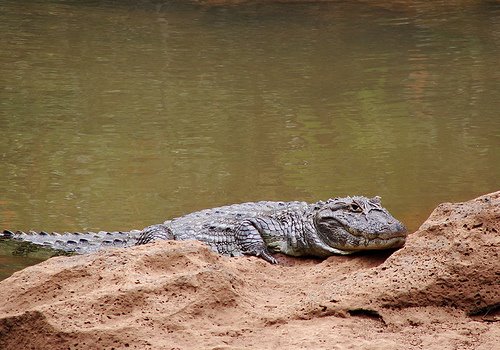 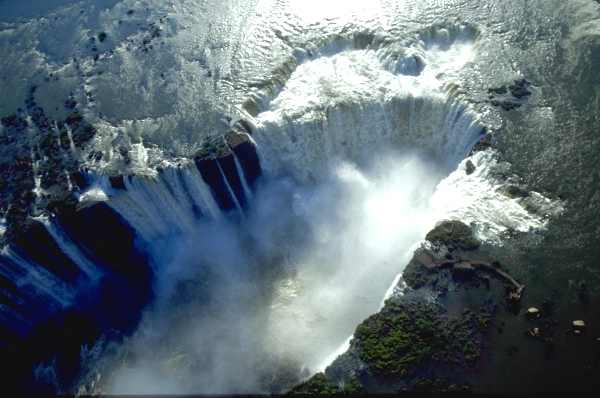 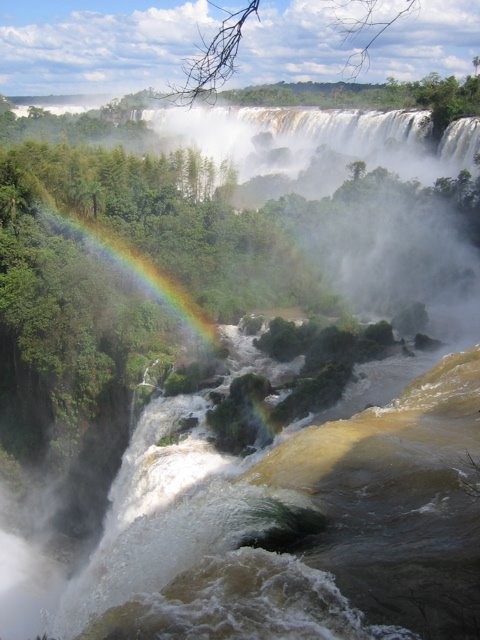