The Yabotí Biosphere Reserve ("turtle" in Guaraní), is located in the Departments of San Pedro and Guaraní , comprising the Municipalities of San Pedro and El Soberbio (central east area of ​​the province of Misiones, Flag of Argentina.svg Argentina).

There is clear influence of the populations of San Pedro, with 18 069 inhabitants, El Soberbio, with 15 109 inhabitants, and San Vicente, with 27 693 inhabitants.

It covers a large sector of the sub-basins of the Yabotí streams, tributaries of the Alto Uruguay, and still covered with forests in a good state of conservation. Among the river courses in the sector that run north-south, the Pepirí-Guazú stands out, an international border with Brazil and the Yaboty or Pepirí-Miní consisting of two large parallel courses that join about 10km north of its mouth in Uruguay: the Yaboty-Guazú to the west and the Yaboty Miní to the east, possessing a vast redimbrifer that acts as the backbone of the reserve that deserves this name ( Yaboty in Tupi language means Turtle ) 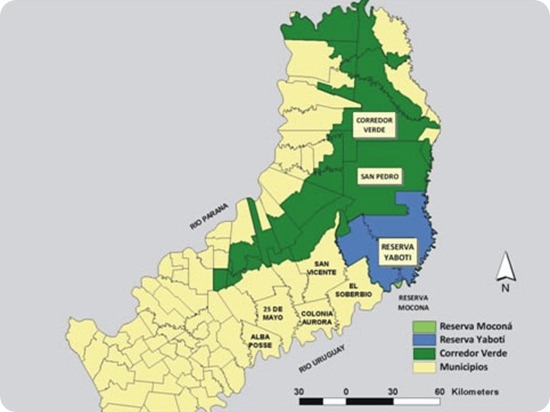 The Yabotí Biosphere Reserve is 119 lots , mostly privately owned. The Moconá Provincial Park and the Esmeralda Reserve, both under the control of the Provincial State, are included within this Reserve.

The area occupied by this reserve is 253,773 hectares, mostly covering a relief of mountains, and in many cases there are very steep slopes. It is part of the so-called "Serra Geral".

The heights vary from 200 meters above the Uruguay river, to 648 meters in the northeast sector of the Reserve.

The water courses are numerous, the most important being the surface of the basin, included within the reserve, the Yabotí stream, which crosses in the central part; The Pepirí Guazú stream is to the east, the Uruguay river to the south and the Paraíso stream and a sector of the El Soberbio stream to the west. Since these properties are mostly private domain, they are currently subject to different types of intervention, the most important being the selective forest type. 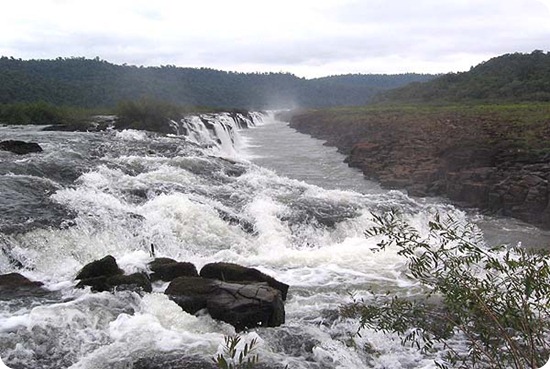 The environment from the phytogeographic point of view corresponds to the Neotropical Region, Amazonian Domain, Paranaense Province, District of the mixed forests (in the low altitude sectors) and Planaltense District (in the high altitude sectors), Jungle Climate Community of laurel, guatambú and Paraná pine (Araucaria angustifolia).

This Reserve covers the southeastern sector of this environment, therefore the presence of "pine" (cury) stands is scarce, since it is an ecotonous environment with little abundance of Paraná Pine, aggravated by the intensive and irrational exploitation of this species. 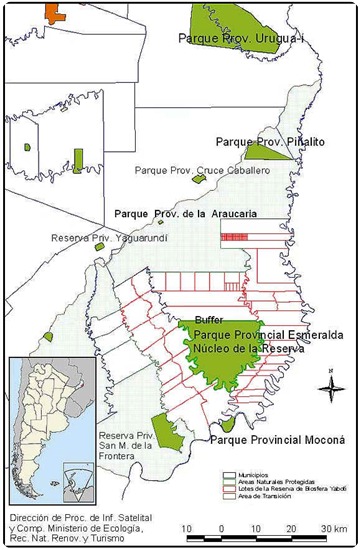 These two species have proliferated amazingly after the extensive and intense exploitation carried out in the area, caused by the greater penetration of light. This has led to a transformation in the herbaceous stratum where many species have reduced their area of ​​natural dispersion, leaving only where competition is reduced. Examples of them are ferns and terrestrial orchids.

As for the epiphytes, they exist in large numbers: mosses, orchids, bromeliads, cacti, guembé, piperáceas and volubles such as vines of San Juan (Pyrostegia venusta), monkey ladder (Bahuinia macrostachys). 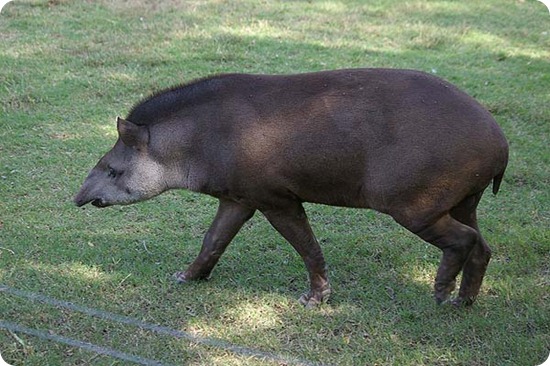 Corresponds to the Neotropical Region, Guayano-Brazilian Subregion, Subtropical District, as it is a wide area and still covered with a lot of natural vegetation, the presence of fauna is abundant. There are 103 species of birds, 25 species of mammals and there are still no finished data on herpetofauna, but there would be 12 species described, which would make a stock of 230 species of vertebrates, this is approximately 33% of the faunal stock of the Province of Misiones. 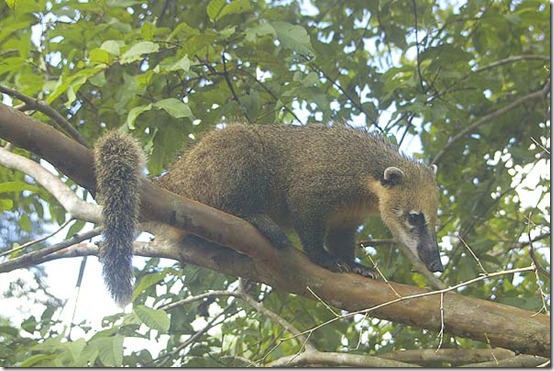 As additional data, in the northern part of the Reserve there was one of the first harpy nests described for Misiones and that it was demolished by a storm. This is a species at serious risk of extinction in the province, a fact caused by the continued disappearance of natural environments in the Province of Misiones.

On the other hand, the zoning as a Mab reserve area of ​​this extensive missionary territory, was during the 1990s a pretext for a massive logging of the native forest rather than a protection of it.

Yabotí as a Biosphere Reserve.

Biosphere Reserves are conceived as an innovation in the management of natural resources, providing a structure capable of relating their management to the needs of the community. Its objective is to foster a balance between the population and its natural environment and thus meet human needs through the promotion of ecologically sustainable development. 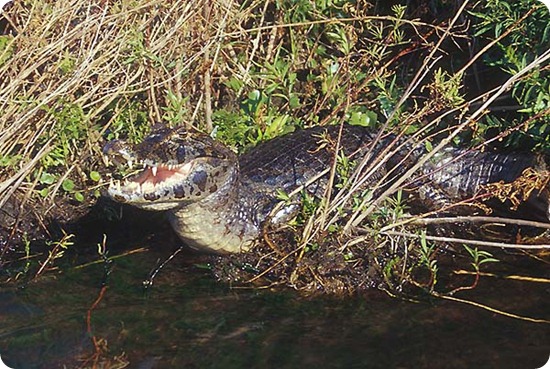 The distinctive feature of the Biosphere Reserve system , of the other types of protected areas, is that the local population must play a constructive role and not be excluded from the management of the unit.

The proposal for the "Yabotí Biosphere Reserve" project is presented in the message of the president of Argentina, Dr. Carlos S. Menem at the World Ecological Meeting, in Rio de Janeiro in June 1992: he speaks of a Biosphere Reserve in Missions coinciding with the Missions government.

Through Provincial Law 3041 and its Regulatory Decree 2472/93, it opens the way for the conservation and use of the natural resources of Misiones. 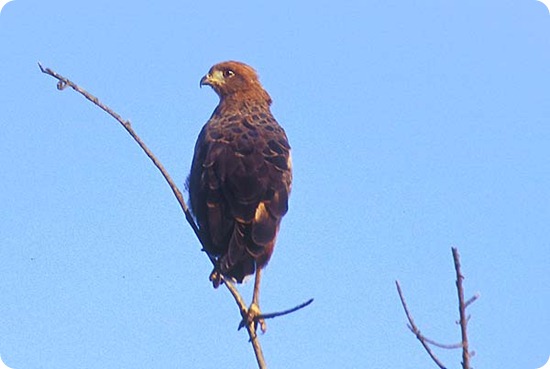 The Reserve, due to its location, bordering Brazil (State of Santa Catarina), is opposed to a highly modified area from a demographic, agricultural and cultural point of view. This border relationship exerts a strong cultural pressure (radio and television), geopolitics (bridges, commerce), legal (illegal land occupation), ecological (hunting and exploitation of flora and fauna).

These inconveniences can be reversed through work to raise awareness of the wealth and importance of the area. Experience has shown that efficient "natural resource management" is not achieved without active integration of the local community. It is here precisely where Environmental Education plays a decisive role.

The concept of Biosphere Reserves is a conservation category that is very appropriate to Latin American reality, as it seeks to reconcile development and protection, making compatible production actions in the buffer and transition zones and applying protection measures in the area. nucleus.

All this would be coinciding with the concept of sustainable development, which includes generating alternatives for local communities and regional actors that are ultimately those that will define the effective possibility of conserving ecosystems and species representative of local natural wealth. Also generating a social process that also exceeds the isolationist vision of preservation. 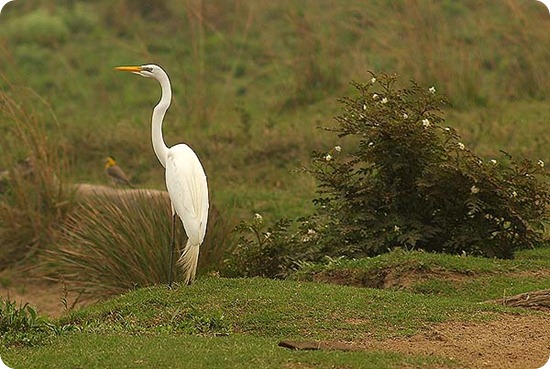