The National Park the Arrayanes is a natural reserve located in the department the Lakes of the Argentine province of Neuquén; it occupies the 1753 has of the peninsula of Quetrihué, on the North shore of the lake Nahuel Huapi.

From 1934 the territory is under protection of the Administration of National Parks, forming to 1971 part of the National Park Nahuel Huapi; in this date it was decided to give independent organization him by the importance of the wooded formation that lodges in its South end, composed in exclusive right of arrayanes (apiculata Luma), a tree of the family of the mirtáceas of showy crust color gilded and slow growth.

The park exhibits a sample of the ecorregión of the patagónico forest, in that the species predominate semidesiduas, alternated with peat bogs whose extension grows in more austral latitudes.

The climate, only slightly adjusted by the lacustrine influence, is cold and humid, with intense and constant winds of the West; the valley in which it is located is of origin glacier, and towards the West the mountain range of the $andes rises.

The most humid station is the winter; the precipitations decrease when moving away of the mountain range, from 4,000 annual mm in Blest Port to 500 in the coast of the Limay river.

The relatively reduced extension of the park restricts the variety of present species; in the environs of the austral lake is the forest of arrayanes (called in mapudungun quetri or temu), and next to this one other species perennifolias, in special coihue (Nothofagus dombeyi).

The bird-raising fauna is rich, and includes as much species of aquatic habit, as cauquén huallata or ganso cormorán imperial (Phalacrocorax atriceps), that nests in the neighboring islands, and Andean (melanoptera Chloephaga), like inhabitants of the forest like the chucaos (Scelorchilus rubecula), several species of woodpeckers (Campephilus spp.), and the rayaditos (spinicauda Aphrastura). Next to the water also one is to strongly protected huillín, the lobito of patagónico river (Lutra provocax).

The species of the forest are from difficult avistaje due to their evasive behavior; they include to the monito of mount (Dromiciops gliroides) - that, in spite of its name, is not primate, but a small marsupial -, the American red fox (Pseudalopex culpaeus), American wild cat (Oncifelis geoffroyii) and one of the smallest artiodáctilos, the pudú (puda Pudu). In addition to the competition that the introduction of exotic represents for the native species concerned of Europe, in special the wild boar and the European hare, and to the cattle, the tourism has represented a serious damage for the vegetation, in special arrayanes.

Due to their slow growth, the youthful units were destroyed inadvertently by the visitors, whereas the removal of the superficial vegetation caused the exhibition by the roots of the greater units, damaging them of irremediable way in some cases.

Today a covered footpath delimits the area of the forest that can be visited, and an area of the park has been detailed strict natural reserves, being prohibited the visit to the same one.

The access to the park can be made as much by lacustrine route, by means of the service of catamarans that leaves from the neighboring city of Bariloche and also visits the island Victory, like by earth, from the almost immediate locality of Villa the Narrowness; the peatonal footpath that crosses the most interesting section of the area opened to the public begins in this last locality, and it extends by almost 14 km.

There is center of no interpretation in the same park, but the zone of the forest of arrayanes is signalized to explain the stages of the growth of this species. The encamped one is not allowed. 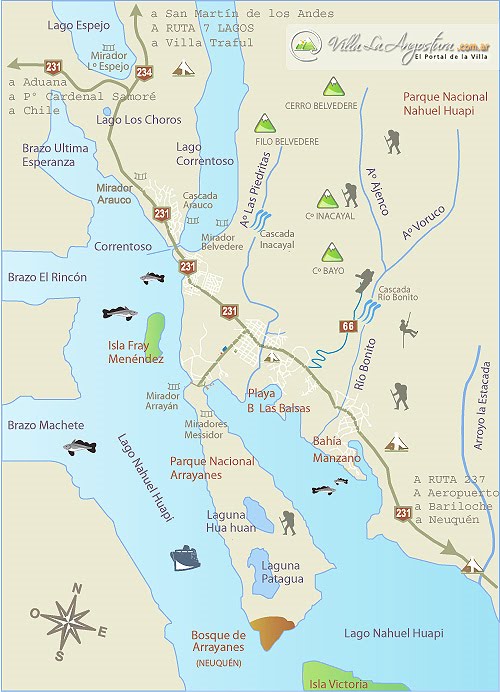