Argentina and the holdouts 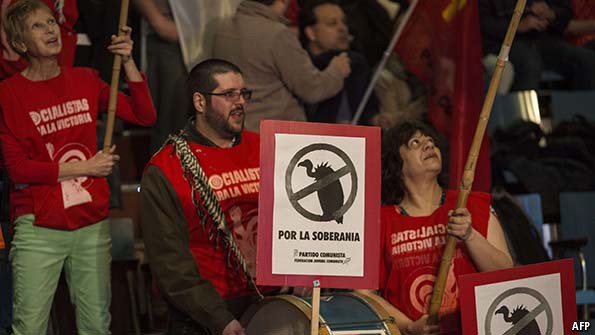 The stand-off between Argentina and its hold-out creditors is like watching a movie in which The Joker battles Lex Luthor: neither side arouses much sympathy. Having defaulted for the eighth time on July 30th, Argentina is a less than model debtor. The hold-out creditors are led by NML Capital, a subsidiary of a New York hedge fund that aims to make windfall profits by buying distressed debt. After Argentina’s 2001 mega-default, these funds swept in to buy its bonds and chase the country for full payment, rather than exchanging it for performing securities like 93% of Argentina’s bondholders.

The hold-outs seemed to have won the day when the American courts (much of Argentina’s foreign debt was governed by New York law) ruled that Argentina could not pay its exchange bondholders without also paying the hold-outs the $1.3 billion plus interest they wanted. Instead, the country defaulted, claiming it could not remunerate the hold-outs without inviting a tidal wave of other claims that would immediately overwhelm its reserves.

Now that the threat of default has been ineffective in forcing a settlement (until and unless a worsening economic situation brings the Argentine government back to the table), NML will seek alternative pressure points. And in a recent Nevada court ruling, it may have found one. On August 11th a federal court in Las Vegas granted NML the right to investigate 123 shell companies allegedly linked to Lazaro Báez, a construction magnate who has been under investigation in Argentina for allegedly embezzling $65m from government contracts. The ruling was facilitated by a Supreme Court decision in June permitting NML to seek information about Argentina’s non-US assets.

By seeking out this Nevada court order, NML has dual motives. The first is to uncover a path to potentially recoverable funds outside Argentina. The second is to ratchet up pressure on the government by inflaming suspicions about corruption at the highest levels. “Legally, this isn’t such a big deal given the size of the debt. Embarrassing Argentina may be the bigger motivator,” says Mark Weidemaier, a law professor at the University of North Carolina.

Mr Báez, who has not been charged with a crime and denies any wrongdoing, insists he has no business outside of Patagonia, let alone Argentina. He says that the allegations are designed to discredit Argentina’s first family: Mr Báez was a close confidant of Nestor Kirchner, the former president and late husband of President Cristina Fernández de Kirchner. In a call with journalists on August 14th, Robert Cohen, a lawyer for NML, said the ruling would help give the fund a better idea of where Argentine funds could be stashed, adding, “We believe that at the end of that rainbow we will find high-level Argentine officials.” The credits on this long-running saga have not yet rolled.