Undoubtedly, the visitor will be able to easily observe the life of the birdlife, in particular when approaching the waterways and the coast.

The winged fauna is very diverse: it is represented in the archipelago by 197 species belonging to 47 different families.

It is estimated that 135 are residents or regular visitors to the islands, 36 are rare or accidental visitors and 23 are hypothetical species with only one or two citations for the Fiji archipelago.

Among the species of the region there are several marine species such as penguins, albatrosses, petrels, cormorants, gulls and terns. Those most associated within the park are those associated with freshwater and land environments. The latter include several herons, ducks, kites, hawks, coots, plovers, coastal birds and various passerines.

Coastal environments are visited by southern oystercatchers (Haematopus leucopodus) and, to a lesser extent, caranca cauquenes (Chloephaga hybrida) (14), both of which are rare sightings. The black oystercatcher (Haematopus ater) builds a nest consisting exclusively of a depression in the ground, which is sometimes conditioned by algae and marine debris (2).

This species is distributed along the coasts of Argentina, and although at this moment a coastal park is in full creation in the province of Santa Cruz, where we can also find it, the Tierra del Fuego National Park is, now, the only national park where we can see it. On the other hand, near the edge of the park, on the northern coast of Lake Fagnano, colonies of cormorants (Phalacrocorax spp.) Have been found. And in the lake itself there were sea birds (albatrosses, skuas, etc.).

In this protected area of ​​Argentina we can observe specimens of four species of cauquén that graze in open spaces: the common cauquén (Chloephaga picta), with a little luck also the caranca and the real (Ch. Policephala), and, if we are very lucky, perhaps we will see the red cauquén (Ch. rubidiceps), of dubious presence in the park (14). This last cauquén is in serious danger of extinction. The black-browed albatross (Diomedea melanophrys), with its more than two meters of extension, the great steam duck (Thachyeres pteneres), the non-flying species and the gigantic petrel (Macronectes giganteus) also frequent these environments.

Other characteristic birds of the park, although less frequent, are the big maca or huala (Podiceps major), which prefers quiet coves for nesting, and the giant woodpecker (Campephilus magellanicus), which finds refuge in the protective canopy of the forest, announcing its presence among the foliage through the rhythmic beating of the beak against the trunks of the trees.

The carpenter lives with the southern parrot or cachaña (Enicognathus ferrugineus) and in the layers of the forest closer to the mulch of dry leaves that cover the ground, in search of food, we can find two species of birds (passerines) that have the limit of their wide distribution in Tierra del Fuego: the chingolos (Zonotrichia capensis) and the thrushes of Patagonia (Turdus falcklandii).

When we climb the slopes, in the distance from the blue sky of the south we can see the high glide of a condor (Vultur gryphus) (1), which appears to us, so deceptively, as a bird of common size. It moves without difficulty using the ascending air currents to reach incredible heights and show as a simple point in the sky, when in reality it can reach up to four meters of extension.

The fish are well represented in the region, but only in the seas adjacent to the Fuegian archipelago, because the freshwater fish fauna is poor in the area (10). Also remember that the national park does not include the sea, where the "star" species for its high sporting value is the snook (Eleginops maclovinus). The native freshwater fauna is represented in the puyén park (Galaxias variegatus) and the species introduced by man for fishing, rainbow trout (Onchorhynchus mikiss), stream (Salvvelinus fontinalis) and brown (Salmo fario), and for the closed salmon (Salmo salar sebago).

The Tierra del Fuego fauna is quite surprising. On the one hand, amphibians and reptiles are not represented in the national park.

Among the most characteristic mammals of the Fuegia territory that protects the park is the red fox, with its (endemic) subspecies of the southern Atlantic islands: the red fox (Dusicyon culpaeus lycoides). This carnivore is one of the largest canids in South America, surpassed only by the size of the irrigated guazú (Chrysocyon brachyurus) in northern Argentina. Its reddish ventral color is characteristic and differentiates it from its close relative, the gray fox (Dusicyon griseus), introduced into the island by man. The latter is much smaller, almost half the size of the native.

Another carnivore of the place, although its presence in the present park requires confirmation, is a small wolf called chunungo (Lontra felina) that lives in the area with its close relative, the huillín (Lontra provocax), more abundant in other areas of the forest Presence subantarctic but confirmed in the park currently. In the adult state, the chungungo or the Magallanes otter does not measure up to a meter long and its color is homogeneous, dark, with reddish shades. He lives in the sea, but approaches the park through the Beagle Channel. It is abundant in the marine sectors sheltered as canals (hence the name "otter" marine)

It is said that the native Fueghi hunted this animal to make coats with their beautiful skin, for which they chased him in a canoe until they came out of the water and there, on the ground, they sent their dogs to attack him. The huillín, on the other hand, is mainly freshwater, so it is usually called "Patagonian river wolf", although it seems to frequent coastal environments, both marine and freshwater ones. Its distribution reaches the western lakes of Patagonia and, to a greater extent, the southern area of ​​Chile. It differs from the chungungo due to its larger size and the contrast between the dark brown of its dorsal area and the silvery white of the ventral one. 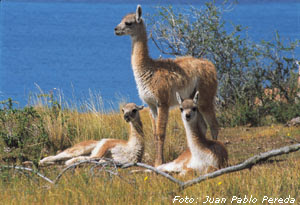 The largest of the archipelago's mammals is the guanaco (Lama guanicoe). Its coat is long and thick, ocher or yellowish, and its height at the cross is about 1.10 m. It is a typical species of open environments, but in Tierra del Fuego it tends to penetrate the forests, and in summer it rises to 600 m in the most undulating area of ​​the region. There his "chulengos" are born, as children are commonly called.

If one year the snowfalls are early, the troops descend to the sheltered sites to regroup and warm up. In that circumstance, the chulengos run the risk of dying, since their forces might not reach them to follow the group. But the danger diminishes when the climate is benevolent, because the steep terrain does not represent a great challenge for these graceful animals. 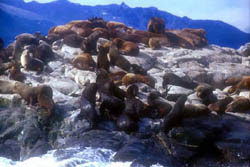 The pinnipeds, although they inhabit the coasts of the islands, arrive at the park with representatives of different species, such as the sea lion of a hair, also called the southern sea lion (Otaria byronia). He was seen entering the Lapataia sector and reaching the outskirts of Lago Roca. Furthermore, in 1986, eight sub-adult specimens were found in a national park on the southwestern island of Chica Bay in the Beagle Channel, very close to Lapataia (10). Cetaceans also visit the Beagle Channel, where they spotted, for example, the southern dolphin (Lagenorhynchus australis) and the thorny porpoise (Phocoena spinipinnis).

Although the marine sector, as we have said, does not belong to the park and, therefore, lacks its protection, visitors can observe the marine fauna from it in its coasts.

As for invertebrates, we could extend hundreds of pages talking only about their snails, but we'll just mention that, mainly on the coasts of the region, there are numerous groups of these animals, such as sea sponges (porifera), starfish (echinodermata), cylindrical worms (annelida), to mention only those most associated with the marine environment. The easiest to observe, among the coastal rocks of the sea, are the molluscs: mussels, colgae and snails.

Shellfish also abound, with species of shrimp, isopods, krill and crabs, to name a few examples. Also the arachnids are well represented, with about 25 families in the archipelago and insects, both on the coasts and within the park, where a large part of their species - such as butterflies (lepidoptera), beetles (coleopters) and ants (hymenoptera) ), among others - will come to loiter around the visitors to announce their presence.

The species of fauna introduced are, among others (see Conservation problems), the European rabbit (Oryctolagus cuniculus), the muskrat (Ondatra zibethicus), the black and brown rats (Rattus rattus and R. norvegicus) and the Canadian beaver (Canadensis Castor). The latter produces a significant environmental impact, because it breaks down trees to build its dams, which in turn cause flooding in some areas of the forest, causing death by flooding of many trees.