Copahue could be named World Natural Heritage by UNESCO (Part I).

Exceptional features, it is one of the country's thermal havens

Copahue Provincial Park, located northwest of the province of Neuquén, Patagonia Argentina, meets two criteria proposed for the assessment of outstanding universal value and to be declared a World Natural Heritage by the United Nations Organization. On the one hand, represent natural phenomena or areas of exceptional natural beauty and aesthetic importance as forests puzzle trees and thermal manifestations and, moreover, is a representative example of the major stages of earth's history.

This is stated in the petition that made the Neuquén provincial government, through the Secretariat for Planning and Action for Development-COPADE that Argentina requested the National Commission for Unesco in order to include in the indicative list Copahue of Argentina to be declared a World Natural Heritage by the United Nations Organization for Education, Science and Culture. 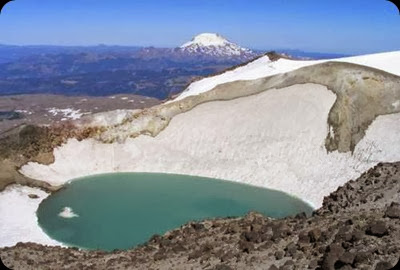 The Copahue Provincial Park, about 28,300 hectares, was created to protect the thermal resources and ancient forest of puzzle trees. Among the most prominent natural attractions to the naked eye is the volcano that bears the same name, as well as a large field that surrounds the lake Caviahue changing product glaciations.

The area has unique characteristics and peculiarities in various aspects that stand out internationally. The volcanic past of the area led to fumaroles and hot springs that mineralize and endow temperature meltwater, forming different thermal resources for quality, diversity and simultaneity are hard to find elsewhere on the planet. The thermal complex is internationally known for the quality and therapeutic properties of its waters, algae and mud, providing the protected area of ​​particular relevance for the scientific, tourist and interpretive view.

Many years ago, this area started to become one of the most preferred places for tourists seeking exclusivity, snow, relaxation and adventure in a natural oasis with unique features in the world. Caviahue-Copahue The resort offers the possibility of trekking, mountaineering, winter sports and activities. Also, take hot baths with mud, algae and fumes from the volcano, which are a must given throughout the summer.

The modern thermal center is at Copahue - "sulfur water" in Mapuche language accommodates for 2,500 baths per day, but only open from November to April because of heavy snowfall that usually fall in the area. Meanwhile, during the winter season all visitors staying at Caviahue-distant just 18 kilometers from where they make fun and original excursions like climbing to the crater of the volcano hike or snowshoe with a Mapuche lonco.

The value of Hydrotherapy

There are numerous thermal manifestations of volcanic origin within the Copahue Provincial Park. Fumaroles and hot springs mineralize the soil and sludge meltwater, forming different resources whose qualities are hard to find elsewhere on the planet. The development of the activity dates back to the Aborigines who considered these rich baths for the spirit. Currently in the complexes exist Copahue and Caviahue custom programs that combine different techniques. More information: thermal Argentina, from end to end.

The Agrio River, which rises in the crater of the volcano and some minor streams by volcanic slopes down to the falls, and make offerings to the landscape falls as seductive as the Basalt Water, Giant, Lady's Hair, Salto Escondido and the imposing Salto del Agrio, with its 35 meters high.

The heritage park complete with remnants of the former masters of the land, archaeological sites scattered through the valleys of streams and Jara Dulce, in the vicinity of Villa Caviahue, where, despite the furtive visit prehistoric souvenir hunters, even can be found pipes, axes, grinding tools and remains of pottery.

Getting there: The town of Caviahue - Copahue is located in the department of Ñorquín, Neuquén. It lies just 363 km from the capital completely paved provincial and 1500 km approx. City of Buenos Aires. You can arrive at the destination via terrestrial means (private car, bus (company Cono Sur from Neuquén) and direct charter Winter Capital Federal / Caviahue). From Loncopué Caviahue combi or limos services are also offered.
From Chile, the Paso International Hachado Pino is 179 km by passing national paved roads No. 22 and No. 40 and No. 21 provincial and No. 26.
After traveling 18 kilometers, by Provincial Route 26 above Copahue, located NW of Caviahue.

Laguna Copahue Crater Volcano. Before reaching the summit at 2,750 meters high,
The volcano has a lagoon of sulfur water, which has a temperature baria between 18 º and 32 º degrees

From Buenos Aires, through regular flights to Neuquen Capital and continue the journey by buses, vans and cars rented by fully paved roads to Caviahue. (Nac Routes No. 22 and No. 21 and Prov 26).

Caviahue City: It is a young city founded on 8 April 1986, but its history goes back to the 30s when the settlers came to the region Neuquén especially the hot springs by the use of the waters of . The first hotel accommodations were built by private initiative and in the 60s with the construction of a hotel, conducted by the provincial government of the zone is activated again. In 1999, Caviahue - Copahue is declared third class municipality through the provincial Law No. 2273.

Climate: The average annual temperature varies between 3 ° C and 4 ° C. In summer there is a large temperature range. Rainfall exceeds 2000 mm. year, occurring mainly between the months of April and October and fall mostly as snow.

Flora: The importance of Copahue Provincial Park on the northern edge constitute or northern distribution of Araucaria araucana or Pehuén in Argentina (the southern limit is up to San Martin de los Andes south of the Province of Neuquén). The Araucaria araucana, constitutes the natural heritage of the place, as well as being an ancient species, is a symbolic tree in the province of Neuquén Mapuche communities and for being the fruit - the "Sprocket" - their food base .

The steppe is the predominant vegetation type, extending into hillsides, plateaus and valley bottoms below 2,000 meters. Dominate coirones and various species of low shrubs and dwarf with relatively high percentages of bare soil (20 to 60%). Peladares and semi-deserts extend over 2,000 meters. on the high slopes of the western sector and the edges of the saws and Unemployed Trolope Palos.

The vegetation cover is low, around 30%, decreasing with increasing altitude, until its demise over 2,400 mts. A considerable amount of mallines height is associated with its water springs above 2,000 mts.

The vegetation is dense adjacent to the drainage network, interspersed with semi-desert and steppe vegetation in areas peripheral zone. Various cushions, mosses, grasses, rushes, sedges and forbs make up these complex herbaceous-shrubby, especially important for its high diversity, high fragility and the role they play in water regulation.
The ñire, develops as a shrub, forming thickets, occupying plateaus, slopes and embankments in various sectors of the area. In many cases there is evidence to indicate that these scrubs are a secondary successional stages after fire in Araucaria forests or lenga. The other Nothofagus present, the lenga forests and low shrublands form of very restricted distribution.

It can also be observed during the months of November onwards wildflowers as the "Topa Topa 'and' Flower Copahue" mutisias, etc..
Since the prevailing environment of this area are steppe and semidesert tall, environment in which are particularly relevant Araucaria araucana forests or Pehuén, which despite occupying a relatively small area within the area (nearby Caviahue Lake and the White River Valley, about 2.5% of the total area of ​​Copahue Provincial Park) one of the objectives of the creation of the protected area was just protecting this relict species, which grows in Argentina, only in a narrow strip of the Andes, the northern boundary being Copahue growth.

The pine growing on hillsides and rocky outcrops below 1800 meters., Developing underneath them ñires dense undergrowth.
Araucaria Male: You can see the catkins ú reproductive organs.
Small Araucaria: These ancient trees or vegetable dinosaurs have a very slow growth. They grow only 3 to 5 cm. per year.

Fauna: The park has a particular interest in faunal be a transition zone between three major ecological regions: the High Andes, the Patagonian and Subantarctic, with the addition of some elements of the adjacent regions of Chile. Although the area is not known for having large animals still inhabit the very persecuted colored / gray foxes and pumas.

The park is of great relevance to conservation because in this area can be found a number of small species that can only be found in our country, and around this area such as the Tucu tucu Maule, rodent highly specialized to live underground and several species of lizards, also a kind of Infant four eyes, not yet described by scientists. Among the birds you can see condors, eagles blackberry, Patagonian gulls, geese or geese, ibises and others.