RN40 was created in 1935 and runs along 11 Argentine provinces, bordering the course of the Andes mountains.

Ruta 40 is the longest route in Argentina and one of the largest in the world (along with the U.S. Route 66 and the Stuart Highway in Australia -without counting the unofficial Panamerican Highway-), more than 5,000 km (3,106 mi) long. 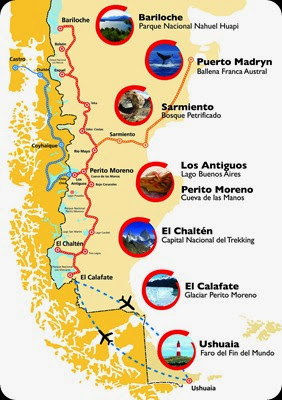 National Route 40 or RN40, often called Ruta 40 even in English texts, is a route in western Argentina, stretching from Cabo Virgenes in Santa Cruz Province in the south to La Quiaca in Jujuy Province in the north, running parallel to the Andes mountains.

The Ruta 40 -Kilometer Zero- (San Martin and Garibaldi streets), the heart of Mendoza City. There was the beginning of Ruta 40 since 1935, and for its extension, the “Vialidad Nacional” decided to divide it into two sections: North (1,551 km) and South (3115 km). Then that “0″ is moved to the outskirts of Mendoza and in late 2004 is moved to “Cabo Virgenes”, the “zero-zero” for the beginning of the continent… and the adventure. 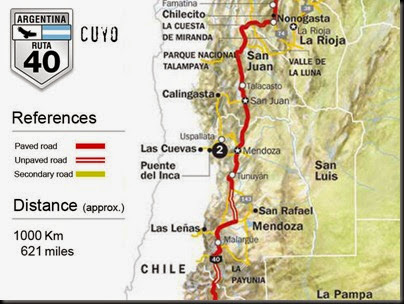 However, the final route, which is about to be decided, will run more toward the west, crossing the Puna, ·Susques” and “Rinconada” to finish in Santa Catalina or Paicone Swamp on the border between Jujuy and Bolivia. Thus, once completed, will add more than 5,200 kilometers.

The southern part of the route, a largely paved road through sparcely populated territory, has become a well-known adventure tourism journey.

Ruta 40 is the longest route in Argentina and one of the largest in the world (along with the U.S. Route 66 and the Stuart Highway in Australia -without counting the unofficial Panamerican Highway-), more than 5,000 km (3,107 mi) long. At its traditional southern end near the city of Río Gallegos it starts at sea level, crosses 20 national parks, 18 major rivers, 27 passes on the Andes, and goes up to 5,000 m (16,404 ft) above sea level in Abra del Acay in Salta.

Ruta 40 extends north to south from 22º 45´ S to the 52th parallel. Projected in other continents, it would cover long stretches in Europe, Australia or North America. 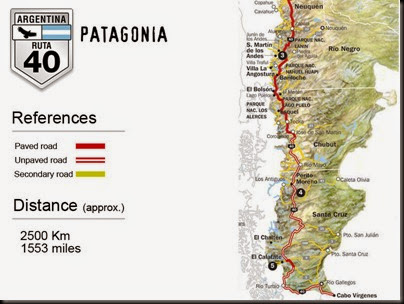