Route 40 extends over 5000 kilometers in Argentina and unites some of the most beautiful and famous country territories. The trail crosses the Cuyo, North and Patagonia.

Kilometer 0 of Route 40 is the Cabo Virgenes in Santa Cruz, and it reaches its end point in the city of Jujuy Quiaca, on the border with Bolivia.

Similar feature to Route 66 in the United States, this Argentine circuit was created in 1935 and although it was not yet fully paved allows full travel with certain precautions. 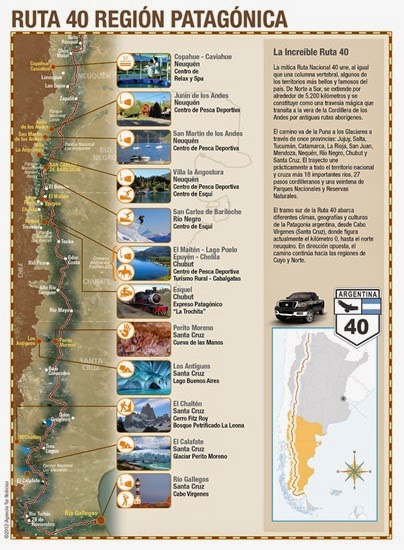 One of the best ways to visit is by region and aboard a private or rental car to enjoy each of the landscapes, with stops every traveler's taste due to the wide variety of attractions. Here we will explain section by section the main attractions of Route 40. 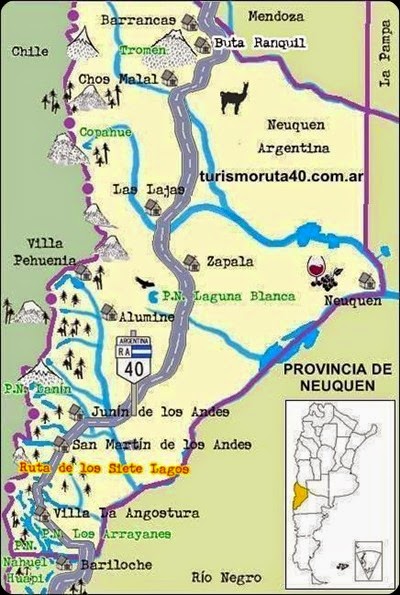 The first locations are traversing the circuit Buta and Barrancas, both dedicated to sheep farming.

The next destination is Chos Malal, which combines a steppe landscape with green valleys and white snow cover during the winter.

Interesting point is the following Caviahue-Copahue Complex, where trekking tours through forests of pine, hot sulfur springs baths and crossings are made to an ancient active volcano.
The adventure continues and Las Lajas Undermine two proposals snow destinations, ecotourism, caving and archeology.

In the mountainous area south of the provincial, the circuit reaches Junin and San Martin de los Andes, both sites of Lanin National Park, which is named after the extinct volcano 3,800 meters high, visited in summer season by many climbers in the world. Also in the area are common outputs sport fishing trips floating by Hua Hum River to the border with Chile, white sports Chapelco and nautical cruises on Lake Lacar.

Then leave for a stretch the 40 and the journey continues by Route of the Seven Lakes, which links San Martin de los Andes Villa La Angostura, in the Myrtles National Park, owner of an ancient native forest that many say was inspired Walt Disney movie Bambi. It also has the Cerro Bayo ski center and Drafty and Nahuel Huapi lakes. 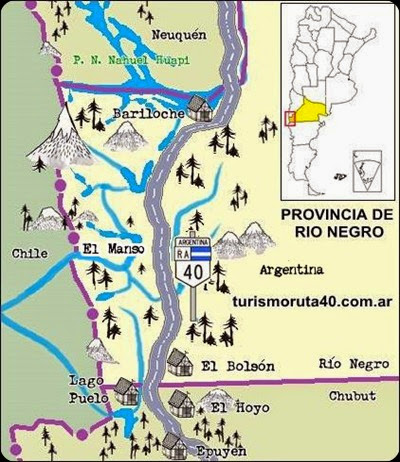 From Villa La Angostura rionegrino first destination-through the National Route 23-is the city of San Carlos de Bariloche, home of the Nahuel Huapi National Park and Cerro Catedral, one of the largest winter resorts in South America. There, attractions like Parque Municipal Llao Llao, Otto, and Ventana Tronador, and Moreno, Nahuel Huapi Lake Gutiérrez and add.

From there begins the new section of National Route 40 (former Provincial Route 258) that leads to El Bolson, at the foot of Cerro Piltriquitrón. A destination that is known for the craft fair, proposals for rural tourism and the new winter resort Perito Moreno.

On the way, which extends 131 kilometers of asphalt, the traveler passes through Guillelmo Mascardi and lakes with excellent places for picnics and camping. 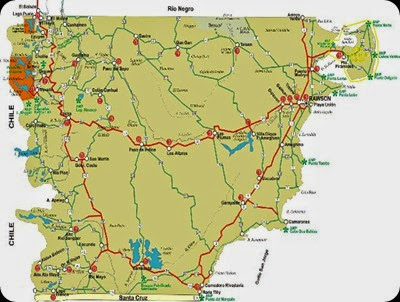 One of the first stops after forced Maiten is Leleque ranch house, where formerly worked one general store and the administrative center of the South Land Company (Southern Land Co.) created by the British in 1889.

The next destination is the town of Esquel, where the ski resort La Hoya works south of Parallel 43 A town with the necessary infrastructure to take a break and go into the National Park The Larches, within which there are campsites, taverns, and warehouses. The unforgettable trip constitutes the tourist train The Trochita.

Among the most picturesque sites Chubut are Trevelin City or Town Mill, one of the first Welsh colony in Argentina.
A few miles further south, and Gobernador Costa Tecka appear. From the first, it is recommended to travel to Corcovado for extreme sports and fishing. In the second, the asphalt road ends and Lake General Vintter, ideal for lovers is pique.

The next villages are Alto Rio Senguer, with trips to La Plata and Fontana lakes, fishing and hunting, and hiking in forests inhabited by huemul; and Rio Mayo, a center of livestock and stays dedicated to tourism, which developed its wind farm. 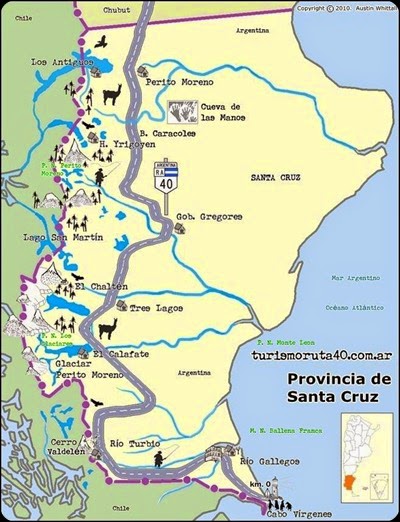 The first town is Perito Moreno Santa Cruz, called by the natives Pari Aike, a must for lovers of archeology by its proximity to the Cave of the Hands on the canyon of river Paints step. The sample of rock art was conceived between 13,000 and 9,500 years ago, by one of the oldest populations in Latin America.

The second is The Old Town, located a few miles from Route 40 on the southern shore of Lake Buenos Aires, the second largest in South America. A destination with a microclimate that allows the cultivation of cherries, strawberries, raspberries and other garden products.

Back in 40, the route to the south connects to Bajo Caracoles just over an hour of gravel in good condition and then Governor Gregores, a town that requires a few kilometers away again. The latter is the largest urban center in the region from which you access the Perito Moreno National Park to visit the lakes and Mount San Lorenzo.

Later, the journey goes to Tres Lagos, where the crossing of a provincial road leading to El Chalten, the National Capital of Trekking is. The access road runs along Lake Viedma to the slopes of Mount Fitz Roy and Cerro Torre. Back in 40, the next destination is La Leona Petrified Forest.

Then you can access one of the gems Argentina, Los Glaciares National Park, where the minitrekking and navigation are captive against the walls of the Perito Moreno, as well as a nautical circuit between ice floes by Upsala, Onelli and Spegazzini.

The closest park to the latter city is El Calafate, on the shores of Lago Argentina, whose waters during the winter season become an attractive rinks.

Among the last of the mountain towns itinerary are November 28 and Rio Turbio, two border cities from which you access the Vandelen winter sports center.

There is a change of direction and the route goes from the Atlantic Coast to reach the city of Rio Gallegos, the provincial capital, ideal for coastal wildlife watching, sport fishing and tourism stays.

Finally, the kilometer 0 of National Route 40 is located in Cape Virgin, on the southern tip of the continent, from where you have a panoramic view of the Straits of Magellan.

National Route 40 and above provincial roads are generally in good condition. However, it is advisable to check the conditions before departure.

For the circuit in Patagonia, the favorite months are ranging from October to April and in winter the journey becomes more difficult due to snow and ice.

Clothing, due to the Andean dry winds or snowstorms, you must combine a light move and a good coat.

For areas of gravel is recommended to increase the inflation pressure in tires (28 to about 32 pounds), and the speed should not exceed 70 kilometers per hour.

On this trip the water is essential, both to quench thirst as for emergencies.

In all gas stations have to stock up on enough fuel because travel times may be longer than expected.