Diving and underwater excursions in Argentina.

The diving experience is ideal for travelers looking to add a fee of adventure on your trip to Argentina.

There are two environments for the practice of this activity: the Atlantic coast, perfect for its clear waters and abundant marine wildlife and areas of natural or artificial lakes (reservoirs) as seen in the map.

This is one of the most complete sensations that the human being can feel. 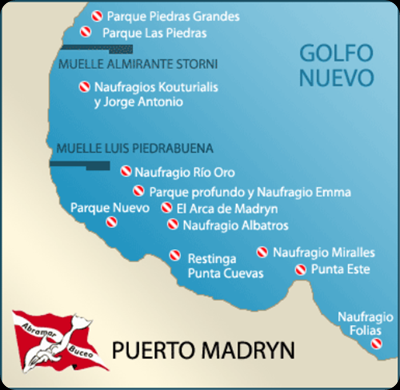 Through diving, man could visit the bottom of the sea, make an underwater world, fish and fondling visit legendary shipwrecks, feeling completely safe and adapted to the water environment.

To develop this activity is not required to possess great physical condition, not a defined swimming style. Just good enough to learn the technical aspects of diving for a carefree dive.

Before taking a diving course, we recommend that a previous "baptism" in open or closed waters are conducted, to be absolutely sure that you want to learn to dive.

This sport helps out of the ordinary, combat stress and find a universe that is beyond the reach of the senses.

Patagonia presents multiple scenarios for this activity. For this reason, it was time to make dreams come true at the bottom of the sea or a lake.

In Patagonia, on the Atlantic Ocean:

Puerto Madryn, is known as the "capital of diving" by offering exploration sites, flora and fauna and wide visibility.

In the same province of Chubut, and a few kilometers from Puerto Madryn, one of the best places for diving is the Peninsula Valdes Nature Reserve, a World Heritage Site by UNESCO. Widely known for right whales that arrive during the first days of June, also offers scuba diving among reefs in the Gulf Provincial Marine Park San Jose.

In the so-called Blue Route, which runs about 500 kilometers from "Blue parks" and petrified forests, another place recommended is Patagonia Coastal Marine Park, established 3 years ago in the town of Camarones Chubut. 130 thousand hectares are protected, ideal for snorkeling and watching penguins, whales and sea lions.

In the same province of Black River, among the elected figure diving Las Grutas, where water is characterized by its transparency and warmth destinations. The activity takes place throughout the year, and the months of visibility corresponding to autumn and winter. Some must see places are: Island Mussel, The Ship, Bright Side, La Escondida, Orengo and Underwater Park.

In Patagonia, on the Cordillera of the Andes:

In Bariloche are between November and April dives in the waters of Lake Nahuel Huapi. In Gallinas Island, you will find an underwater museum carved log cabin cable car and Cerro Otto. Nearby is San Miguel shipwreck in Victoria Island and the Sunken Forest Villa Traful.

At the end of the world:
Among the most extravagant destinations, is Ushuaia. There are recommended sailing the Beagle Channel and Lapataia with a fascinating underwater life and several shipwrecks to explore.

From Ushuaia, leads to Antarctica to dive in colder waters of the world, an activity that is combined with cruises and kayak trekking on ice.