First Peoples of the Northwest.

This indigenous group inhabiting the region known as the Puna and its area of influence extended from the northwestern province of Jujuy to northwest Catamarca , comprising the province of Salta .

The cochinoa Casabindo and also of the Puna, were related to apatamas, like the atacamas the other side of the Cordillera, with whom they shared a common language, the Cunza.

The apatamas received cultural influences from its neighbors Diaguitas calchaquíes, omaguacas and Altiplano, were excellent farmers who harvested corn, potatoes and quinoa. These foods were stored in the rock walls of the mountains, in which they made holes where deposited.

Worked stone and wood, making shovels, hoes and knives. They domesticated the llama, which they used as a beast of burden and also got meat, milk, hides and wool. Another activity was the exploitation of the salt, from which extracted salt bricks then carried on the backs of flame to the various villages, where traded for various products, especially corn.

Like other towns in the region, which took apatamas offered their environment and so built their rectangular houses with stones and mud (cairns) and thatch, with an opening at the top as input, which was accessible through wooden ladders. It is noteworthy that the apatamas not own fortifications (pucarás) as omaguacas.

Wore a long tunic to the knees, which the Spanish called "T", of red or brown for warmth were covered with a woolen circle with an opening in the center for the head, called "poncho"; around his waist with a sash wore wool and leather sandals called "husutas" (sandals). They covered his head with a cap that covered the ears and also the neck and adorned with necklaces, pins, headbands, bracelets and pectorals made of bone, feathers, wood and metal.

Poor in the production of ceramics, apatamas craft developed great skill in woodworking and pumpkin.

The omaguacas gave their name to the region known as Quebrada de Humahuaca in Jujuy Province. His name, according to Spanish sources, meaning "treasure heads" and included a large number of tribes which included the purmamarca, the tilcara, the tumbaya, the Maimará, what s Jujuy, the puquile, the Ocloya and others. Place of passage between the Altiplano and the valleys of northwestern Argentina, crossed by the Rio Grande, this region was an area of ​​ongoing conflict, before and after the arrival of the Spanish.

While northern climate is dry and Puno, south has a subtropical environment with abundant vegetation and regular rainfall. The Rio Grande, in its 170 km route gives rise to the so-called narrow, exploited since time immemorial by indigenous peoples given their fertility.

The omaguacas were mainly farmers of maize and to a lesser extent potatoes and quinoa. They practiced hunting guanaco and rhea, The Taming of the calls that took advantage of its many products-and collecting carob. 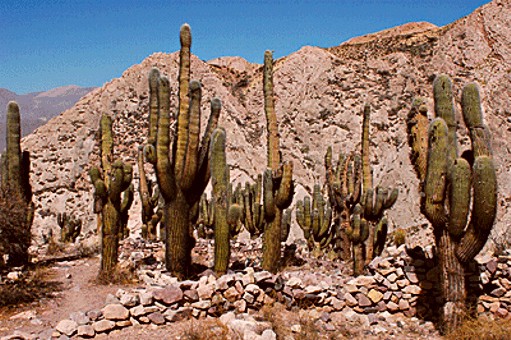 Its production potter (fair quality) had the characteristic red background with decorations in black. Elaborated large round jugs and so-called "glasses-drums" of notorious Central Highlands influence.

Its activities included the manufacture of weapons such as bows, arrows, bolas and slings; worked with copper, gold, silver and tin. They wore blankets and long shirts uncu calls; were covered with ponchos, wore sandals, headbands, bracelets, rings, pectorals, etc..

Their houses were rectangular, stone, thatched inclined, no windows and a single opening.

The strategic nature of the Quebrada de Humahuaca made omaguacas a people prepared militarily. To defend against invasions fortified enclosures designed stone, which called pucarás and since they fought using bows and arrows, stone maces and bolas. Both Spanish Incas as experienced at the time Omaguaca resistance.

Diaguitas biases that populated northwestern Argentina were constituted by the North calchaquíes, the cacanes in the center and southern capayanes, groups that had, among their common characteristics, the use of language or diaguita cacán. They were the most advanced between groups that populated the Argentine territory and this was due mainly to the powerful Inca influence. 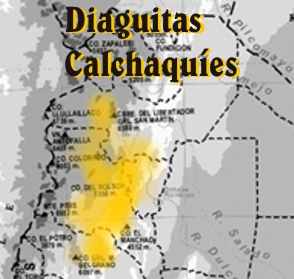 According to sources Hispanic, diaguitas were "tall and strong"; wearing typical woven wool shirt adorned with colorful geometric patterns. They wore sandals and adorned with headbands, rings, pins, etc.. made in metals like gold, copper (which joined with tin for bronze), stone, wood, etc..

Of the Incas, the diaguitas learned to cultivate in terraces, thereby taking advantage of the hillsides to produce corn, potato, pumpkin, quinoa, beans, etc.. The aridity of the land was counteracted by artificial irrigation, building for this great canals and ditches, a technique also taken from Inca. 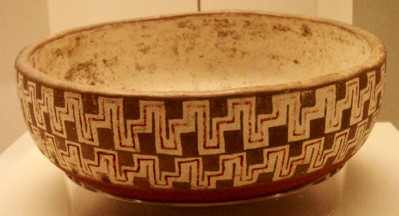 They practiced collecting carob-fruit of the carob-, that served food and the elaborated which alcoholic beverages such as chicha and the hosts. Achieved the domestication of the llama, made the most of it produced by this animal, which constituted an important part of the economy diaguita.

Spanish sources mention the bellicosity of the diaguitas, grouped into tribes whose names have survived in local place names: pulares, tolombones, Cahis, chicoanos, aimachas, Quilmes, hualfines, luracatos, etc.. who opposed a stubborn resistance to Spanish domination, turning into legend as names Viltipoco leaders, Juan Calchaquí Colca Pedro, Pedro Chumay, Pate, Ultimpa, Chalemín, Luis Enriquez and Martin Iquín latter, curaca (head) of the Quilmes, who paid dearly for his defeat to be deported en masse to what is now the province of Buenos Aires, giving rise to the current sad town that bears his name.

Brothers of the calchaquíes language, the capayanes inhabited the provinces of La Rioja and San Juan, in a region between those, huarpes north and to the south, between the valleys of Famatina, Yacampis Sanagasta and crossed by the Colorado and Jáchal. 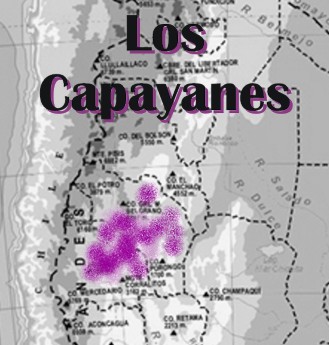 Village farmers, consuming Capayán corn, squash and quinoa that artificially cultivated in irrigated fields through canals and ditches. This technology demonstrates the Inca influence, as well as their clothing, fabric production and guanaco llama wool, copper metallurgy and gold. At capayanes attributed Sanagasta ceramic style or Angualasto characterized by geometric decorations in black on red background.

Although the study of indigenous groups in Argentina requires us to contextualize within a defined geographical area, it can lead to the false belief that we are dealing with cultures fixed in time and space. Nothing is further from the truth, it must be recognized that in ancient times the great mobility of people was evident. Examples of this were the lules, hunter-gatherer group arrived in ancient times from the Brazilian Amazon to the western Chaco forest. From there, these warlike nomads made contact with sedentary peoples of Andean culture in the area of ​​Santiago del Estero and Tucuman, as tonocotés, who frequently harassed and looted. According to Spanish sources, the lules practiced cannibalism and not for the Spanish conquest "... tonocotés had finished with ..." said Father Barzana. 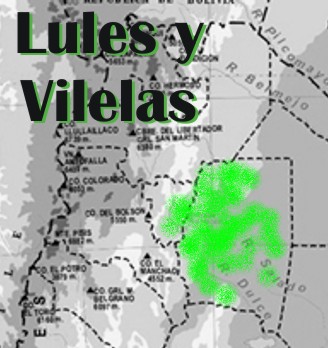 Of great size and slender, the lules preferably fed the products of hunting and fishing, complementing this activity with collecting carob and wild honey. They used bow and arrows, clubs and throwing darts. Usually naked, covered with feathers used rheas, so that the Spanish called "Juries" these Indians in the early sixteenth century chronicles, as this would come from the Quechua word XURI, name that designated Andean villages these birds runners.

For their part, Vilela, neighbors of lules and culturally related, differed from those in sedentary habits they had acquired, with an incipient agriculture and animal husbandry. In more peaceful habits, fond of music and dance.

Inhabitants of the south-central province of Santiago del Estero, these Indians had-like lules and vilelas - an ancient Amazonian origin, but were heavily influenced by the cultures of western Andean origin. Sedentary farmers, mainly concentrated tonocotés between Dulce and Salado rivers, limiting the sanavirones south, west to the calchaquíes and north and east by the warlike domains lules. 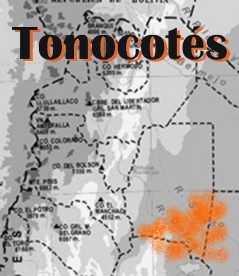 They grew corn, squash and beans in waterlogged soils near the rivers, which, after the flood, there deposited a layer of fertile silt.

Their dwellings circular branches and mud had the characteristic of being built on artificial hills or mounds known as barrows, grouped in villages surrounded with fences, to protect themselves from attack by lules and other tribes of the Chaco forest.

Evidence of his distant Amazonian origin is given by certain hunting practices, such as using poisoned darts and custom to ensure their dead and keep your bones in clay pots.