National Reserve Laguna Brava, unique for its rugged beauty and landscape framework of the Andes. 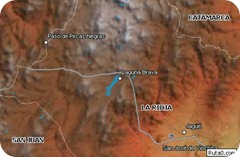 It is a unique place for its rugged beauty and landscape framework offered by the Andes . The most impressive mountains in the vicinity of the lagoon are the Veladero and hills and Bonnet Large Cap C hico.

It is 4200 meters and vicuña reserve (can be seen in many a few meters from the road) and has recently been named a Ramsar site.

It is a very important wetland for its seasonal population of flamingos pink and high salt background gives it its characteristic white color. It is a high Andean volcanic lagoon of 17 km. long and 4 km. wide, muddy and shallow contour with associated wetlands and meadows and rivers fed by snowmelt and rainfall. 405,000 hectares are protected.

The most characteristic feature is the body of water that gives the name to the Park, nestled between conical hills, gentle slopes and steep walls fences.

The lagoon , 1,700 hectares, is fed by two streams temporary scarce caudal del Llano Blanco and Pichi-Ñireco. The aquatic birds, spectacular for its variety and quantity, forms the primary attraction of the park is the swan neck and black as the main protagonist.

The multitude of birds that frequent the Laguna Brava also includes flamingos that nest in it, ducks, plovers, sandpipers and grebes silver.

The trip to Laguna Brava begins in the village of Vinchina 330 km from the capital of La Rioja. The only street that has the people leads to a bridge over the river Bermejo. From there, a dirt road that you can travel with common car ascends the Quebrada de La Troy.

The tour continues to Alto Jague, last town you pass through before entering the vastness of the mountains. From Jague the road continues along the Quebrada Santo Domingo, through gentle hills that seem covered with a velvet blue, green, purple, brown and orange, because soil minerals. Every so often, on the slopes desert, you can see the race graceful guanaco and vicuna of stillness stone interrupts on high.

The following costs is the "Quebrada del Rock". At the edge of the path are curious circular huts with walls of stone and mortar (mixture of lime and earth). Constructs measured five meters in diameter for three and a half high, and its architecture is similar to that of an igloo, terminating in a dome. These are the thirteen shelters set up in the area between 1864 and 1873 to house the cattle drovers leading Chile.

The ascent continues until four thousand feet. Finally we leave the main road to go through a dirt track on the downs. As you approach the center of the valley is the image of a lagoon with majestic peaks oval around it (the Veladero, the Bonnet Chico and Pissis - the second highest in America, with 6,882 meters above sea level).

In the distance you get to see the remains of an abandoned plane made an emergency landing in the fifties.

The serenity of the environment still breaks when a hundred pink flamingos spreads its wings and takes flight in unison. Given this picture, the feeling is to be here to stop the kingdom absolute calm of solitude, this enormous valley where the mountains acquire multicolor dyes strange blue, orange, green, purple and brown.