Conservation of the Jaguar and the Puma 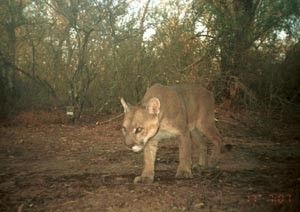 Ecology and Conservation of the Jaguar (Panthera Onca) and the Puma (Puma Concolor) in the Argentine Semi-Arid Chaco: Comparing Two Areas with Different Levels and Types of Human Interference.

Research on jaguars and pumas in the Argentine Chaco is extremely limited, and the information vacuum is an important obstacle to conservation efforts. We are studying the ecology of both species, including distribution, density, prey availability and sympatric relations between them determining the principal conservation problems facing these species in the region.

We are working within the Chaco Green Corridor of the Impenetrable region: In 2008 we worked in the Aboriginal Reserve were we stayed for near trhee months and where we worked with 30 camera traps stations covering a minimum convex polygon area of 44,903 has.

We also conducted line transect surveys and interviews with local people. In this site human inhabitants are few, but it is vulnerable in terms of access by hunters from ranches and towns and livestock also occasionally enters the reserve, generating conflicts between people and large cats.

In calendar year 2009, we will work at Copo National Park and Reserve. Copo is the only national park within the Semi-arid Chaco region, constitu the best-protected portion of the Argentine Chaco and one of the most promising sites in terms of the survival of the jaguar in the region. One important outcome of the first year of sampling, was the absence of jaguar photographs in the camera traps. 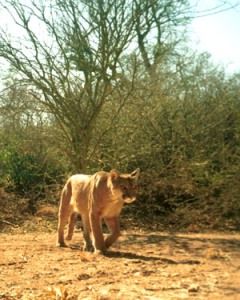 The lack of jaguar photographs in Aboriginal Reserve was not an unexpected result for this area and perhaps is not a result not expected for Copo, because we know that the species is in serious trouble in the region. But, precisely, the importance of this second survey in Copo and in others areas of the region is based in the need of determine how serious the situation is, in which sites of the Chaco Green Corridor is still the species and hopefully, what is its density in the best-preserved sites.

Recently I participed in the International Mammalogical Congress 2009, here in Argentina, and I presented some results from the project of jaguars and pumas in the Argentine Chaco that Rufford has financed in 2008. 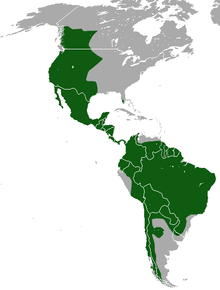 In the first 6 months of 2009 we started sampling at the second study site of the project, Copo National Park, located in the Impenetrable of the semi-arid Argentine Chaco. Copo is the Impenetrable’s protected area with the greatest degree of formal protection and supposedly has less hunting and human influence. We made two trips to the study area, a preliminary study of 10 days in July 2009 and the large study of almost 3 months from September to November 2009.

In July 2009, we identified and walked the trails we would use during sampling, visited some of the local people to resume the contacts initiated in previous years, and recorded some preliminary data of signs and sightings of the wildlife of the national park. During the September to November study we installed 24 camera–trap stations in Copo National Park and neighbouring ranch properties. The stations were 3 to 4 km apart, covering a minimum convex polygon area of 361 km2. Throughout the campaign there were 1096 potential trap-nights but the 24 stations overall were active for only 34 days, totaling 816 trap-nights. 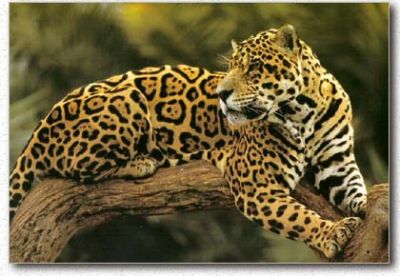 We covered over 2,200 km on foot and by car within the study area, recording tracks and sightings of jaguar, puma and other mammals and potential prey of both cats. We conducted informal interviews on jaguar, puma and their prey with seven national and provincial rangers, one teacher and 10 rural residents who are neighbours of the National Park.
We did not record data of jaguars with either camera traps or line transect surveys but we recorded a good number of photos, tracks and sightings of puma Puma concolor, as well as other species of high conservation value for the area such as giant armadillo (Priodontes maximus), white-lipped peccary (Tayassu pecari), Chacoan peccary (Catagonus wagneri) and giant anteater (Myrmecophaga tridactyla). We are currently organizing the 2009 field data and beginning the data analysis to determine densities and intensities of use of the environment by the different species studied. In the next few months, we will comparing these new data with those obtained in 2008 from the Aboriginal Reserve.