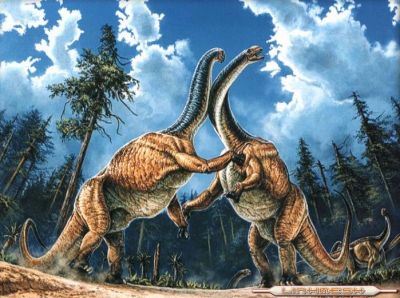 Approximately 65 million years ago, a large percentage of vegetables and animals suddenly became extinct. It was in the late Cretaceous period and there are various theories about it. Some scientists attribute this event to a gradual process that finally led to selective extinction. Others assert that a catastrophe, such as an asteroid hitting the Earth, caused these species mass extinction.

In the province of Neuquén, for example, was found about 30 fossil sites in the course of the past three decades. They have identified 40 species of dinosaurs distributed in the provinces of Salta, San Juan is-especially in the Valle de la Luna (Ischigualasto), San Luis, Mendoza, La Rioja, Chubut, Neuquen, Rio Black, Santa Cruz and even Antarctica. This would represent approximately 10% of all species that have been found around the world, so far. Which gives us the pattern of global paleontological significance attesting Argentina, on prehistoric findings and as the birthplace of dinosaurs and primitive ecosystem. 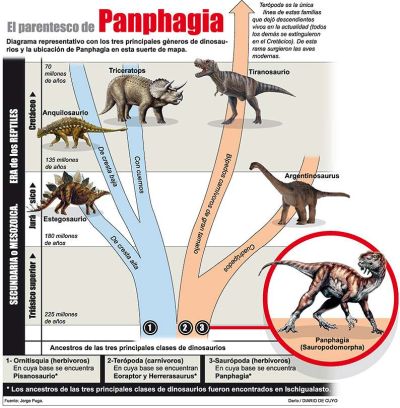 However, these past life forms did not completely disappear. They left traces that even today leave men astonished: fossils. These prints from the past have contributed to backing the theory of evolution and they are the main tool used to study the geological past and reconstruct the history of the Earth.

Parallel to the changes occurring in living species, there were also large geographic and climatic changes. There was, in those days, one continent on the planet, known as Pangea. The Andes Mountains had not yet formed, allowing the sea came up to the present province of Neuquén. Later, the waters receded leaving behind large lakes and lush vegetation, providing a habitat for the development of the lives of dinosaurs. During the Jurassic period, the giants lived quietly feeding on coniferous forests and large trees like the pine. With the formation of the Andes, in the Tertiary, there was a second invasion of the waters from the Atlantic Ocean. This was particularly important for the current work of paleontologists, because sedimentation processes after those two invasions of marine waters, contributed to favor the preservation of fossils. It is believed that sedimentation processes would be the key to the preservation of fossils.

That is what Paleontology is about. It aims at studying all the aspects of the biology of ancient life forms: their shape and structure, their patters of evolution, their taxonomic relationships with each other and with modern species, their geographic distribution and their interrelationships with the environment. This science has also provided accurate data to locate deposits of oil and natural gas.

Argentina has been the cradle for very significant findings in the field of Paleontology. This is the land of the Giganotosaurus, the Noasaurus and the Titanosaurus.

100 million years ago, the territory consisted Patagonian forests populated grasslands interspersed with rivers and streams. The Andes did not exist, even if there were active volcanoes. The Pacific Ocean came to this territory. With this soil and geography, the climate was then presented humid tropical or subtropical.

Among Cretaceous vegetation, Araucaria species were observed, and other oddities ginkos primitive. There under the trees ferns, cycads and flowering plants first made their appearance. In that period lived the largest carnivore found so far, the Giganotosaurus Carolini, whose dimensions were about 14 meters in length. In the same medium, lived with smaller carnivores and herbivores, highlighting the Andesaurus Delgadoi. Aquatic turtles, predecessors of the current, and small primitive mammals and flying reptiles example was the pterosaur, and insects such as dragonflies, but larger than those existing today with invertebrates, made up part of the ecosystem prevailing.