Important: some of the contents of this blog have been selected to be published on the HIVE.blog platform.

The Homeland of the Tango.

Comprising almost the entire southern half of South America, Argentina is the world's eighth largest country, covering an area of 2.8 million square km. Argentina possesses some of the world's tallest mountains, expansive deserts, and impressive waterfalls, with the diversity of the land ranging from wild, remote areas  in southern Patagonia to the bustling metropolis of Buenos Aires in the north. 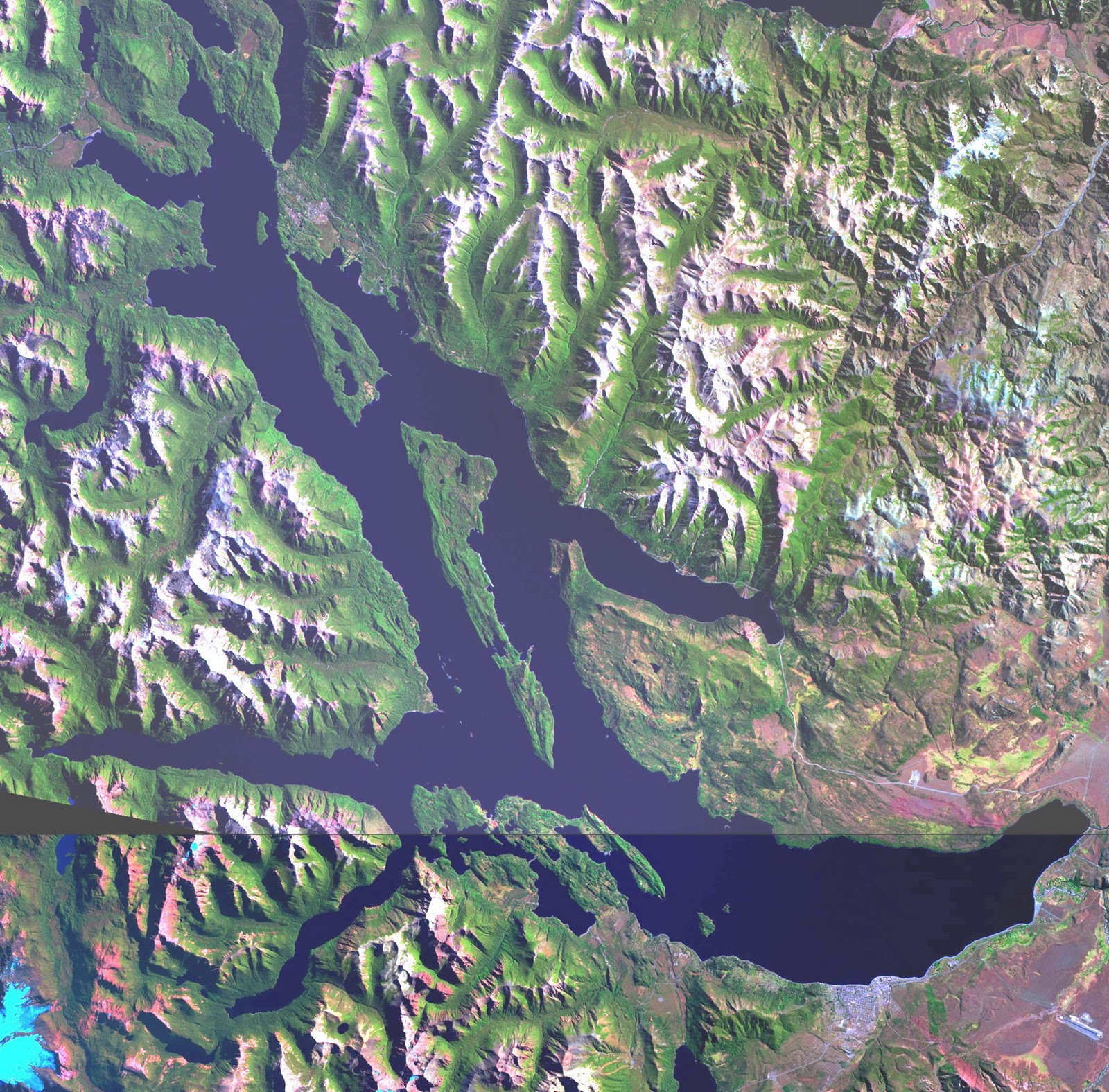 Buenos Aires, known as “The Paris of South America”, is a great metropolis with eleven million inhabitants and one of the largest in the world. It is also the most elegant and busy city in South America and is in some way the essence of the variety of the Argentinean.


Buenos Aires is a city that is open 24 hours a day.


Whilst of modern construction and dynamic activity, it has managed to preserve old traditions and charming corners. One is fascinated by the atmosphere, the individual personality of each of its neighbourhoods, the cordiality of its people and the wide selection of its cultural and commercial opportunities. This complex, energetic, and seductive port city, close to the splendid countryside surrounding it, is the great cosmopolitan doorway to South America. 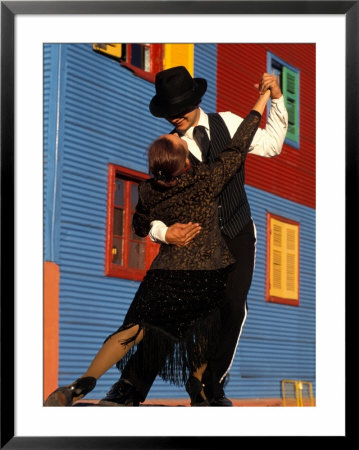 With its wide boulevards, ornate architecture and love of statues, squares and gardens it is a delightful city for walking in and observing. From the old port to the chic boutiques of Florida with the outdoor cafes there is a sophisticated lifestyle which is famous throughout Latin America.

Argentina is one of the most beautiful countries in South America.Click to Tweet
Buenos Aires is a city that is open 24 hours a day with some of the best restaurants and bars in the world and its own special “New World “ dynamism which has developed with the great mix of European and South American Cultures all in one city. For all its diversity, the elusive spirit of Argentina as a country is present everywhere in Buenos Aires.

The national dance, the tango, is perhaps the best expression of that spirit - practiced in dance halls, parks, open plazas and ballrooms, it is a dance of intimate separation and common rhythm, combining both an elegant reserve and an exuberant passion. A deliciously typical Argentine dinner followed by a traditional tango show will be one of your highlights when in Buenos Aires.

A visit to one of Argentina's ranches.


A visit to one of Argentina's ranches provides you with a perfect experience of stepping back in time to a bygone era of rich traditions and being at one with nature.  Located amidst 350 hectares of beautiful and unspoilt age-old landscape for as far as the eye can see. Relax and enjoy the gentle heat of the sun on your cheeks, the warm breeze blow through your hair and take a deep breath of the pure and fresh air, this is the best that Argentina's countryside has to offer.  The ranch is self-sufficient and boasts a full organic orchard were produce is grown and then used in the restaurant. Even the bread is made in traditional mud ovens at the ranches own bakery each day.   For relaxation the ranch offers a swimming pool set in its tranquil surroundings, a coffee house, where once the farm workers used to meet up after a hard days work and enjoy some traditional beverages.  There is also a stage where some exciting and colourful entertainment will be shown a museum which houses a fine collection of antiques, carriages and farming machinery, and there is even a Souvenir Shop where you can purchase traditional produce like honey and cheeses to traditional handicrafts like the colourful ponchos. 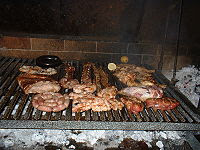 Asado is cuts of meat, usually beef, which are cooked on a grill (parrilla) or open fire. Asado is quite popular in the Pampa region of South America, and it is the traditional dish of Argentina, Paraguay, Uruguay, Chile and the Southern States of Brazil.

Asado is also a dish in the Philippines and it differs from the Latin American version because instead of grilling, the beef is cooked in a sweet tomato-based stew that is usually accompanied by potatoes, carrots and other vegetables.  In Brazil, asado is called churrasco, and although the method of cooking is similar, it is seasoned with Brazilian spices.

Charcoal is predominantly used instead of embers of wood, and Brazilians tend to cook the meat on skewers. In some places, the meat is seasoned with salt and a bit of sugar.

An Argentine asado typically has a sequence of meats presented by the asador (the cooker).

First are the chorizos, morcillas, chinchulines (chitterlings), mollejasprovoleta, a grilled cheese dish. Sometimes these are served on a coal-heated brasero. Then costillas or asado de tira (ribs) are served. Next comes vacío (flank steak), matambre and possibly chicken and chivito (baby goat). Dishes such as the Uruguayan Pamplona, pork and Patagonian lamb are becoming more frequent, particularly in restaurants.
An asado also includes bread, a simple mixed salad of, for instance, lettuce, tomato and onions, or it could be accompanied with verdurajo (grilled vegetables), a mixture made of potatoes, corn, onion and eggplant cooked on the parrilla and seasoned with olive oil and salt. Beer, wine, soda and other beverages are common.  An asado can be made al asador or a la parrilla. In the first case a fire is made on the ground or in a fire pit and surrounded by metal crosses (asadores) that hold the entire carcass of an animal splayed open to receive the heat from the fire. In the second case, a fire is made and after the coals have formed, a grill (parrilla) is placed over with the meat to be cooked.  Another traditional form to mainly roast the meat, used in the Argentine and Chilean Patagonias, is with the whole animal (specially lamb and pork) in a wood stick nailed in the ground and exposed to the heat of live coals, called asado al palo.
The meat for an asado is not marinated, the only preparation being the application of salt before and/or during the cooking period. Also, the heat and distance from the coals are controlled to provide a slow cooking; it usually takes around 2 hours to cook an asado. Further, grease from the meat is not encouraged to fall on the coals and create smoke which would adversely flavor the meat, indeed in some asados the area directly under the meat is kept clear of coals. The asado is usually placed in a tray to be immediately served, but it can also be placed on a brasero right on the table to keep the meat warm. Chimichurri, a sauce of tomato, bell pepper, garlic, parsley, lemon, oil and vinegar, or salsa criolla, a sauce of tomato and onion in vinegar, are common accompaniments to an asado, where they are traditionally used on the offal, but not the steaks. In Chile it is usually accompanied with pebre, a local condiment made from pureed herbs, garlic and hot peppers.


Perito Moreno Glacier is a glacier located in the Los Glaciares National Park in the south west of Santa Cruz province, Argentina. It is one of the most important tourist attractions in the Argentine Patagonia. The Perito Moreno Glacier is one of only three Patagonian glaciers that are not retreating. Periodically the glacier advances over the L-shaped "Lago Argentino" ("Argentine Lake") forming a natural dam which separates the two halves of the lake when it reaches the opposite shore. With no escape route, the water-level on the Brazo Rico side of the lake can rise by up to 30 meters above the level of the main lake. The enormous pressure produced by this mass of waters finally breaks the ice barrier holding it back, in a spectacular rupture event. This dam/rupture cycle is not regular and it naturally recurs at any frequency between once a year to less than once a decade.  The terminus of the Perito Moreno Glacier is 5 km wide, with an average height of 60 meters above the surface of the water, with a total ice depth of 170 meters. It advances at a speed of up to 2 m per day (around 700 m per year), although it loses mass at approximately the same rate, meaning that aside from small variations, its terminus has not advanced or receded in the past 90 years. At its deepest part, the glacier has a depth of approximately 700 m. The glacier first ruptured in 1917, taking with it an ancient forest of arrayán (Luma apiculata) trees. The last rupture occurred in March 2006, and previously in 2004, 1988, 1984, 1980, 1977, 1975, 1972, 1970, 1966, 1963, 1960, 1956, 1953, 1952, 1947, 1940, 1934 and 1917. It ruptures, on average, about every four to five years. The Perito Moreno glacier, located 78 km from El Calafate, was named after the explorer Francisco Moreno, a pioneer who studied the region in the 19th century and played a major role in defending the territory of Argentina in the conflict surrounding the international border dispute with Chile. 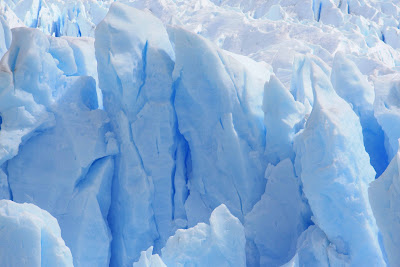 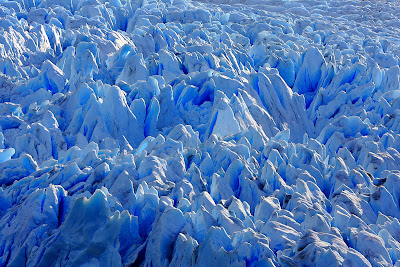 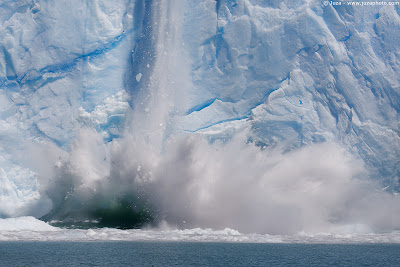 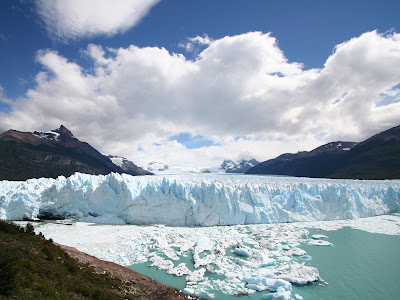 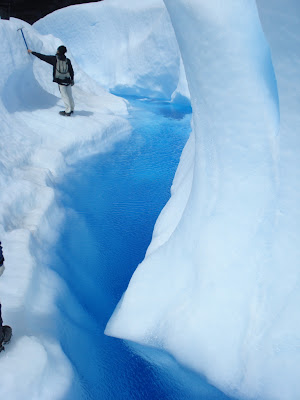